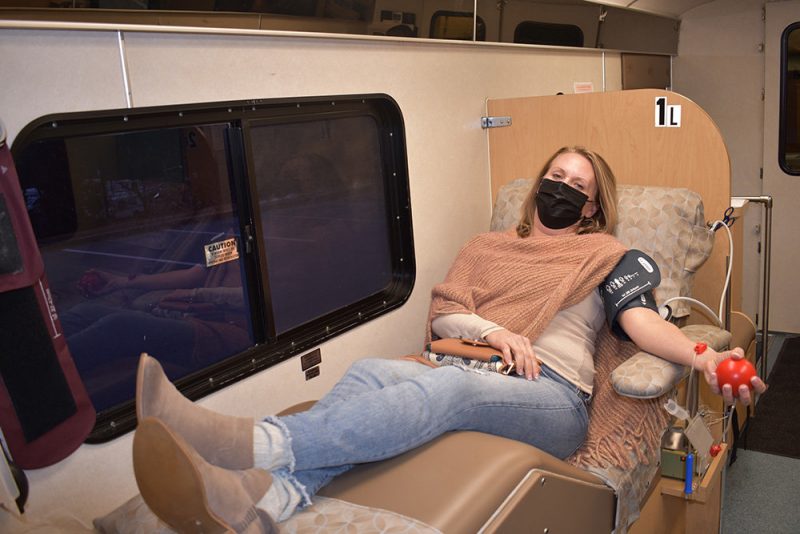 Twenty minutes of your time and a pint of blood could save a life – or three.

Blood banks nationwide are in dire need of donations amid what the Red Cross calls its “worst blood shortage in over a decade,” and our local hospitals are no exception.

The Luminis AAMC Blood Donor Center takes donations by appointment onsite at the hospital, but mobile blood drives account for more than half of its collections.

Here at home, businesses and good Samaritans are stepping up to the plate.

“It’s been amazing,” said Julie Shay, president of Good Neighbors Group, of the community’s participation in the blood drives.

Those donations are going straight to Luminis AAMC.

For realtor Kevin Bonk, who has organized blood drives for more than a decade, it’s personal.

Diagnosed with a blood disorder that decreases his platelets, Bonk has, at times, relied on blood and platelet transfusions to treat this disease.

“Because of this condition, I cannot donate blood myself, so I can at least facilitate a donation site,” Bonk said.

Pasquale Carannante, owner of RE/MAX Experience in Pasadena, finds it imperative to give blood, and has made an annual event of it as a way to encourage others to do so as well as hold himself accountable.

“I went to the hospital when I was 19 and found out that I was O negative (a universal blood type), and since then have felt a moral obligation to give blood as often as I can,” Carannante said.

Good Neighbors Group, The Bonk Team of Keller Williams and RE/MAX Experience have all hosted blood drives in February. Since each pint of blood is able to be split into three products, the donations from those three drives alone could affect more than 200 lives.

While all blood types are needed at Luminis AAMC, types O positive and O negative are in highest demand, Frisk said.

Nervous about needles? You’re not alone.

“I used to be terrified of needles, and I remember in college getting up to the door of where I could donate and feeling clammy and walking away,” Shay said. “Now that I’ve done it, I’m obsessed… Once you know somebody who’s had a transfusion and you know how it’s helped them you feel grateful that folks did this. My mom was in the hospital a year ago April and she did get transfusions and I thought, ‘That could be some of ours!’”

A few pointers from the pros: eat iron-rich foods for about a week before donating blood, eat a full meal the day of, stay hydrated and bring a buddy.

Shipley’s Choice resident Jen Lewis, who has donated routinely since COVID hit, successfully lobbied her friend and fellow Shipley’s resident Kelly Atkinson to return to the bloodmobile after a fainting episode her first time donating.

Atkinson is now a regular donor herself, despite the nerves.

“It was so easy and the staff in the bloodmobile were so friendly. I didn’t pass out, the blood bank got some O negative, and I got Oreos and a ginger ale! Win-win-win,” Atkinson said, adding, “It’s hard to try again after a negative or stressful experience, but that effort pays off when you have the opportunity to save a life.”

Good Neighbors Group strengthens communities by sharing opportunities that have a positive social and environmental impact.

We’ll let you know about ways to be a Good Neighbor by sharing service opportunities, events and ways to help in the community. Don’t forget to follow us on Facebook, Twitter and Instagram, too!